Going into my junior year of college at Michigan State, I decided to get my own apartment. It was quaint and came furnished. My parents had bought me some dishes the year before that I stacked into my small cupboards. The kitchen was small and narrow. Even the stove was miniature. This is where I first started to cook. I remember calling my mom one day asking her how to cook a chicken breast. We all have to start somewhere, right?

As time passed, I would often call my mom for recipes that I remembered eating at home growing up. Chili. Swiss Steak. Cheesy potatoes. And a winter favorite, pot roast! Over the years, I have taken the original recipe my mom shared and have made it my own. I’ve added a few ingredients, such as mushrooms and a dash (or three) of Sriracha hot sauce. My husband suggested adding some parsnips in addition to the carrots. Today I cook pot roast in our little 3-1/2 quart Le Creuset dutch oven, instead of using a roasting bag in a 9″ x 13″ baking dish. As we were preparing our week’s shopping list, with hints of spring in the air, I felt the need to make one last pot roast for the season. A few hours later, I had everything I needed to start cooking! 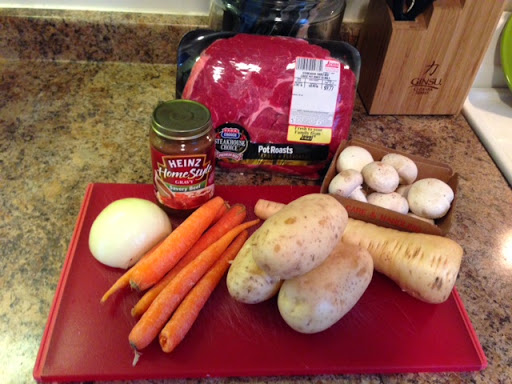 I wish I could say that I have the perfect system down, but really it is just a system of messy madness. If there’s not a puddle of water on the floor and flour everywhere, my husband must be cooking. In my mind, as long as it tastes good, who cares about the mess?

We were trying to get out for a walk before the sun set, so I got right to work washing all of my vegetables and chopping them up. I started by finely slicing half an onion into thin strips, tossing them into the Le Creuset with a bit of olive oil, letting them sizzle. Immediately the apartment smelled amazing! While the onions were getting soft, I chopped the remaining vegetables, set them aside for later and turned the oven to preheat at 350 degrees.

For someone who loves to cook and eat, I cannot stomach touching raw meat. So, I threw on a pair of rubber gloves and got to work trimming the enormous pot roast my husband brought home. I cut it into chunks, approximately 3 – 4 ounces each. Per Mom’s recipe, I dredged the chunks of pot roast in flour, seasoned with some salt and pepper, and placed them into the pan with the onions to brown before adding the veggies and gravy. I like to move the onions off to the side so that the meat can brown more evenly across the bottom.

After the meat browned for a few minutes on one side, I flipped it over for the second side.

Once it was browned to perfection (well, my standard of perfection anyways), I grabbed the onions with tongs and sprinkled them over the pot roast. Then I started strategically piling on the chopped vegetables. As I mentioned above, our dutch oven is on the small side.  It is always a struggle to make everything fit perfectly. 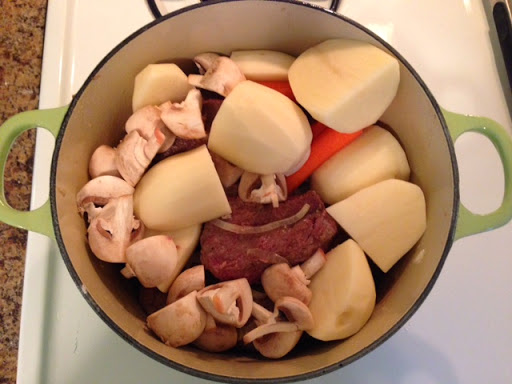 After everything was in the pot, I shamefully added one 12 ounce jar of pre-made beef flavored gravy. I have yet to figure out an easy homemade gravy recipe. I would prefer not to have the chemicals and other strange ingredients in my food, but since I was racing the sunset, the jar would do! You are probably asking, “That’s all of the sauce?  12 ounces?” No. I then filled the rest of the dutch over with water, almost to the top. As the pot roast cooks, it boils down into a perfectly delicious sauce. How does it get so yummy? More salt and pepper, and my go-to hot sauce, Sriracha! Just for a little zing. I certainly don’t use enough to make it spicy. 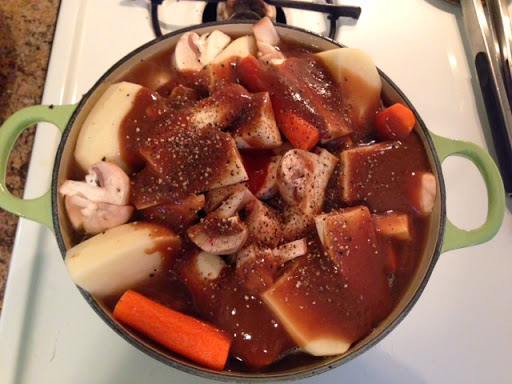 My father-in-law, Thomas, suggested that when we use the dutch oven, we cover it with aluminum foil first before topping it with the lid. This helps create a tighter seal. Since I have started doing this, the pot roast stays moister throughout the baking process. Some of the sauce does boil over and evaporate, but not nearly as much as my early efforts. Dressed in chrome and lidded, the pot roast went into the oven! 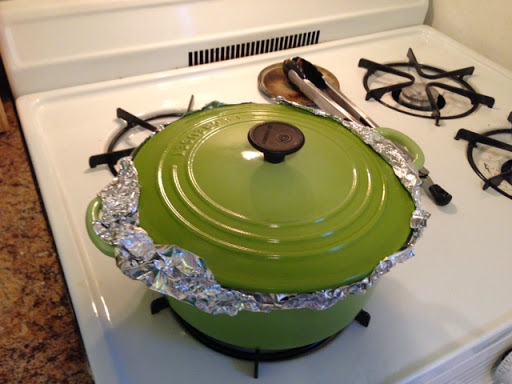 In my opinion, the longer you can cook a pot roast, the better. I try to aim for 3-1/2 to 4 hours. After our walk and a leisurely evening of TV and games, we finally pulled the pot roast out of the oven. While it cooled, we steamed some broccoli. And then FINALLY…it was time to eat!

As I have mentioned above, there is a bit of madness to my method. I am more of a “bit of this” and “dash of that” type of cook than someone who measures everything out to the perfect portions. This is probably the reason for my horrible baking skills! The recipe quantities I share below are what I used for this particular batch of pot roast. Want more carrots? No mushrooms?  Go for it! Make it your own, just as I have made this recipe from my mom my own.

1.  Add sliced onion to dutch oven and saute over medium heat until fragrant and tender.  While the onions are cooking, wash and chop remaining vegetables.  Set aside.  Pre-heat oven to 350 degrees.

2.  Trim and cut the pot roast into 3 – 4 ounce chunks.  Mix flour with 1/2 tsp salt and 1/2 tsp pepper.  Dredge each piece of pot roast in flour mixture.  Move cooked onions aside in the dutch oven, and add chunks of pot roast to brown.  Flip each piece after a few minutes to brown the other side.

3.  Once the meat is browned on both sides, turn off the heat and add all of the vegetables to the pan.  Top with the jar of gravy, remaining salt and pepper.  Add the Sriracha sauce (if desired).