This year we changed up our usual Thanksgiving travel plans. We decided to take advantage of the holiday by taking the entire week off while using only three precious vacation days. Another bonus? We were able to avoid the busiest days of the year by leaving Saturday and returning the following Saturday.

The first leg of our trip was to New York City. We boarded a plane Saturday morning and watched Chicago disappear below us as we sped away. I had not been to NYC since my freshman year of high school, and let’s be honest, that was a long time ago! My one request? I wanted to walk through Central Park. We did this, and more.

We stayed with friends who live in Midtown Manhattan and were shown one hell of a time! We did a ton of eating at some of their favorite spots, taking a tour of the globe with our taste buds. After we got settled in and spent some time catching up, we hit the pavement. I got to take the subway, which I thought was pretty cool. It’s much larger than Chicago’s L. 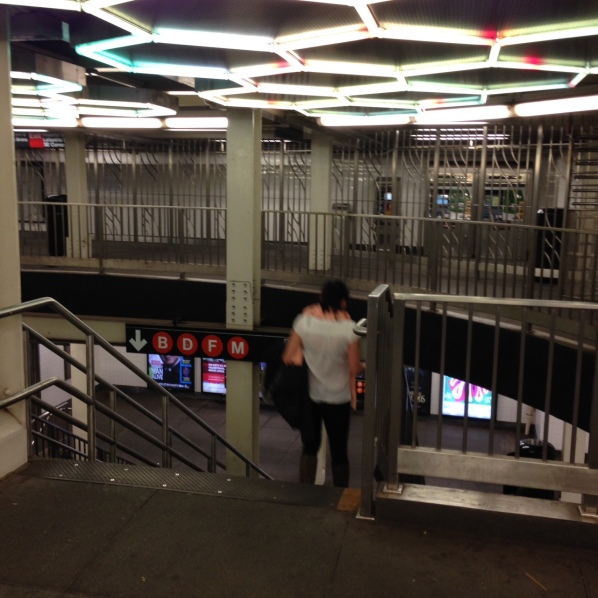 Our first stop was the Paulaner Brewery on the Lower East Side where we enjoyed a couple of beers and the sausage sampler plate. After that we headed to a Brazilian restaurant, Casa, in the West Village. The food and drinks were amazing! It disappeared from our plates so quickly that I forgot to snap a photo, so you’ll just have to take my word for it. We started with a delicious black bean soup with bits of bacon, followed by small pastries called Salgadinhos Sortidos that were filled with chicken, shrimp, and cheese, as well as farm cheese bread called Cestinha de pão de queijo. For dinner we shared a couple of dishes, my favorite being the Brazilian national dish, Feijoada, which is a black bean stew with beef served with rice, fresh oranges, collard greens, farofa (a toasted flour mixture), and a vinaigrette sauce. Less than twelve hours in and I was stuffed!

Sunday we headed to brunch at a Midtown West English gastropub, The Breslin. We sipped on spicy Bloody Mary’s while waiting for a table. Once seated, we quickly devoured the menu with our eyes. Evan and I shared the oven baked three cheese sandwich with ham and a fried egg and the chargrilled lamb burger with feta, cumin mayo, and thrice cooked chips (fries). Both were To. Die. For.

Sunday night our friends treated us to a special dinner at home. They ordered Australian Wagyu steaks from DeBragga, a famous butcher in New Jersey, that were delivered in vacuum sealed packaging. We shared two New York Strips and two Ribeyes. Side dishes for this feast included sautéed cremini, trumpet, and white mushrooms, sautéed asparagus, and zucchini fritti. They truly spoiled us!

On our last day in the Big Apple, we traveled to Soho for lunch. Café Habana served up some incredible corn and Cuban sandwiches, noted as NYC’s best. The corn was smothered in mayo, cotija cheese, chili powder, and lime juice. It was the best cob of corn I’ve ever eaten. What was so great about their Cubanos? The pork! This tasty sandwich contained house-marinated citrus roast pork, ham, Swiss cheese, chipotle mayo, and pickle on a toasted roll. 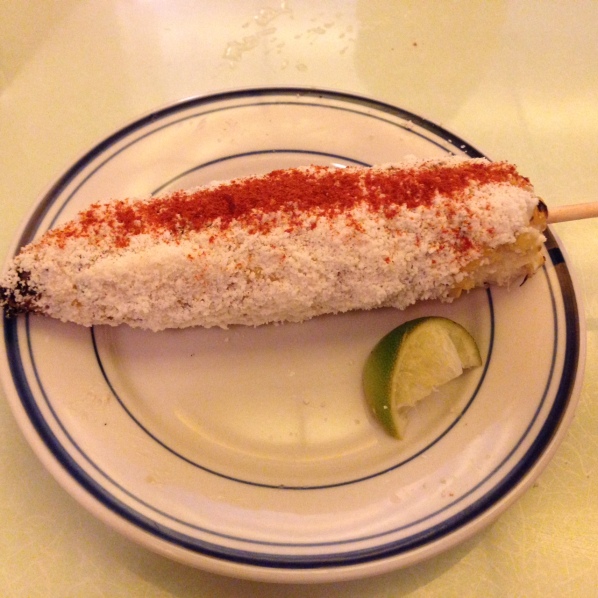 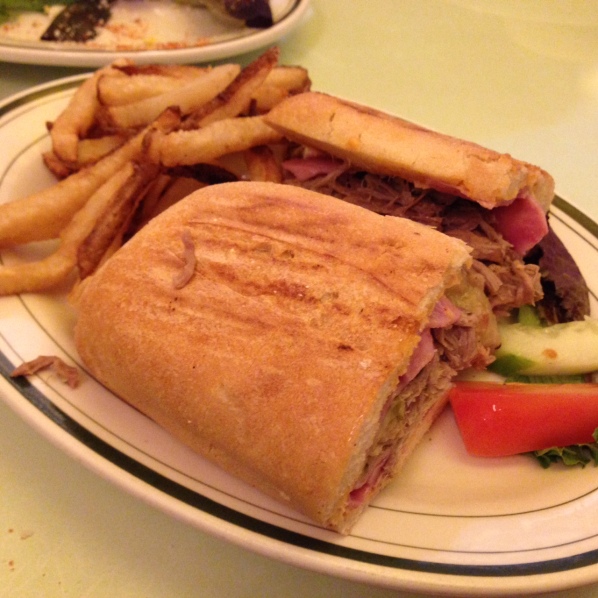 After lunch, we walked around a bit to burn some calories. We strolled through Central Park and past Times Square, the NBC Studios, and Rockefeller Center. We couldn’t have possibly had better weather. It was near 70 degrees! We took advantage of the warm temps and headed to a rooftop bar at a Midtown West hotel, Ink48. The Press Lounge is on the 16th floor, with a large outdoor seating area. The cocktails were delicious and the views spectacular! 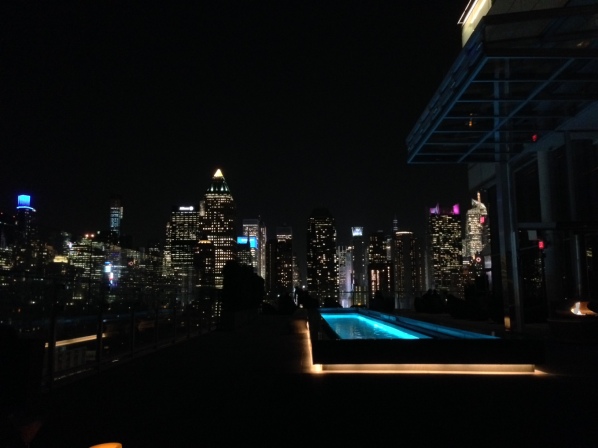 Our last tasty stop in NYC was to Nyonya. Despite its location in Little Italy, Nyonya serves up incredible Malaysian fare. The four of us shared several dishes, which were gone in a flash! My favorite was the Beef Rendang, tender pieces of beef simmered with cinnamon, cloves, and lemongrass in coconut milk. I could share a picture of my empty plate, but that wouldn’t be very nice… 😉

Tuesday morning we hopped on a Megabus to Providence, RI where we shared a fun-filled evening with old friends and their two children. Dinner was a delicious vegan chili with chips, salsa, and a crusty loaf of bread on the side. The chili included quinoa, which imparted a wonderful, crunchy texture. After dinner we chatted until we couldn’t keep our eyes open a moment longer. The next day, it was time for the next leg of our trip. We couldn’t leave Providence without one last meal though. We hit up Trinity Brewhouse for beers and burgers before heading to the train station.

Planes, trains, and automobiles was not an exaggeration! From Providence we took an Amtrak train to Boston, hopped on their subway system (the “T”) to travel to North Station, and boarded a different train to Evan’s hometown in NH. It sounds pretty hectic, but we made it through all our transfers without a hitch!

We always spend Thanksgiving with Evan’s family. It’s quite an event! This year Evan’s mother, Lucy, and her beau, Jim, hosted a hungry crowd of 27 family members and friends. There was no shortage of snacks, turkey dinner, dessert or beverages! It’s always a fun day filled with old family stories and laughter. I feel honored to be a part of this annual event. 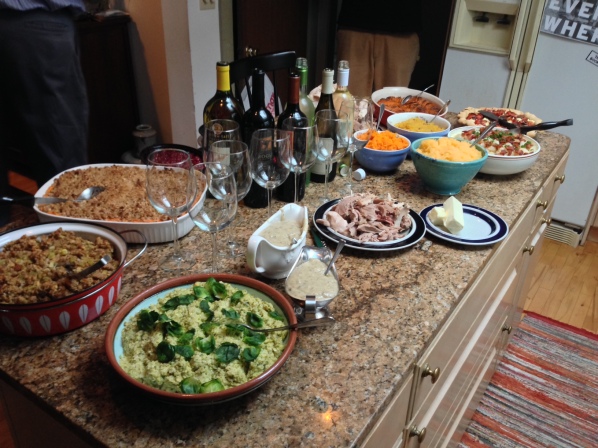 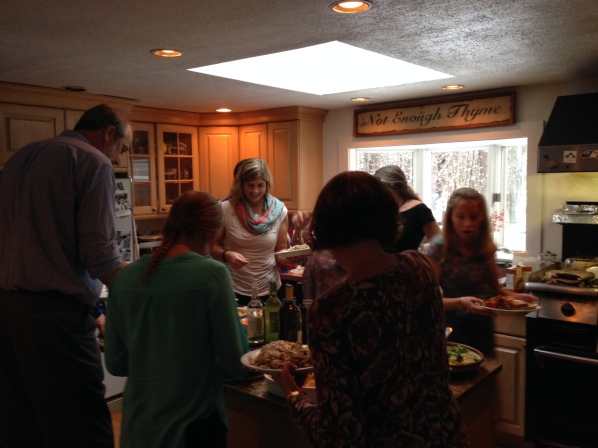 We returned home to Chicago with very full bellies and amazing memories. It was certainly a trip to remember. Thank you to everyone who shared this adventure with us!